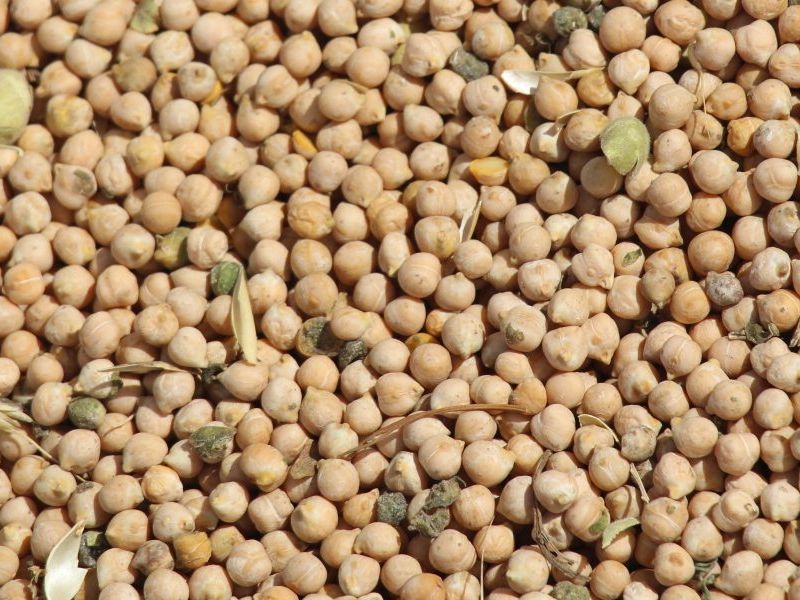 Of all the protein crops suitable for human consumption, chickpea (Cicer arietinum) is, after soy, particularly promising for cultivation and local processing in Flanders and in Northwest Europe. That is, if varieties become available that can cope better with our climate and cultivation conditions, and that provide a good yield and a decent protein content. ILVO has therefore decided to start breeding chickpea for suitable, high-performance seed.

This project is funded by Flemish Minister of Agriculture and Food Hilde Crevits in the framework of the Flemish protein strategy.
"Breeding takes a long time. If we start a breeding program today, we will only have the first new varieties ready in just under 10 years," says ILVO breeder Tim Vleugels.

Why chickpea?
Because people are interested in it, and because ILVO favors technical feasibility.
The demand for vegetable protein sources is on the rise. That is why ILVO has been systematically exploring the potential of several protein crops for several years.
Hilde Muylle, ILVO researcher: "We now have a realistic picture of the technical cultivation challenges, the expectations from the Flemish food sector, and the supply of varieties that are grown under conditions similar to ours. Chickpea scores well in the exploratory research."

There is a clear and growing interest in locally grown chickpeas in Flanders, for several reasons. Chickpea contains a moderate amount of protein (25%) compared to soy (up to 40-45%). An advantage is that chickpeas contain few antinutritional factors so people digest them more easily than other legumes. And unlike, for example, lupine, chickpeas are already well established as a food product in our country. Consumers and the food industry appreciate chickpeas for their mild, neutral flavor, and thus their wide range of uses.

Chickpea on Flemish fields: the start
ILVO has a basis from which to start breeding.
Tim Vleugels (ILVO researcher): “We rely on our fundamental knowledge of agriculture and genetics. And we can start breeding with already existing foreign varieties that we are allowed to use in new crossings.”

The first experiences with cultivating chickpea in Flanders is positive. Compared to soybeans, peas or lupins, chickpeas are less sensitive to bird damage during the sowing and germination phase. Chickpea appears to be little sensitive to frost and can be sown early. The crop does need warm weather during flowering and also during ripening. Last year, the wet summer of 2021, the trial crop failed. The cold June month gave poor fruit set, and the wet August month prevented the desired ripening.
The conclusion is that the many existing varieties of chickpea from abroad currently do not perform well enough in terms of harvest security and yield in our country to successfully introduce a profitable, competitive new crop. In years with favorable conditions, ILVO obtained approximately 3 tons per hectare from the experimental field. Through improved, adapted varieties, the breeders aim for 4 tons, even in less than ideal weather conditions.

Efforts and assets on multiple fronts
ILVO breeders will work on three trait improvements: Faster maturation is needed under our sometimes cool conditions. Natural disease resistance must increase against the fungal pathogen Phoma rabiei (formerly Ascochyta rabiei), because this disease causes patchy wilting of plants. And as mentioned, the aim is to achieve more kilos per hectare and a more stable yield potential. The researchers see chickpea as a crop with truly extensive research and optimization potential. The genome sequence of chickpea is already known and compact, which makes breeding based on genetic information possible.

In addition, ILVO has direct access to the growing knowledge about nodulation (the formation of root nodules in the roots of the plant). Chickpea grows as a legume in symbiosis with specific soil bacteria, which convert nitrogen from the air into nutrients for the plant via root nodules. Research can clarify which are the most suitable Rhizobium strains (soil bacteria) for Flanders.

Finally, ILVO also has a lot of nutritional and feeding research capacity at its disposal. The processability, digestibility and taste of future new varieties and of possible residual products can be tested in the Food Pilot, the pilot plant of ILVO and Flanders'FOOD, and in animal research.

Flemish funding used to strengthen Flemish protein strategic plan with chickpea
The Flemish government project FutureAdapt is used by Flemish Minister of Agriculture and Food Hilde Crevits to stimulate production of more local, climate-robust, plant-based proteins in Flanders: “Together with many partners, we are working towards an innovative food economy. This results in more and more concrete accomplishments and new crops, such as this project with chickpeas by ILVO. We want to continue along the path of sustainability and diversification in our protein production and consumption. Via the Flemish recovery plan, we are providing an additional investment of 4 million euros for cooperation projects to make the protein supply in Flanders more sustainable. Farmers who choose to start with protein-rich cultivation can also count on technical and financial support.”

Stay up to date with the latest news!